CD-ROM Review: Haight-Ashbury in the Sixties

Title: Haight-Ashbury in the Sixties
Distributor: Compton's New Media (Rockument)
Cost: $50.00 List, but $35 is the usual street price (see below)
Media: Two CD-ROMs - IBM and Macintosh format on same disk
Requirements: More than 8 megabytes of RAM (with 8 megabytes everything works, but not without General Protection Fault crashes, 12 megabytes and everything seems to work flawlessly), at least a 486SX/25 processor or 68030 processor.
Editor's note: This program was listed in the Editor's Choice: 75 Best CDs in the Dec, 1995 issue of PC World. 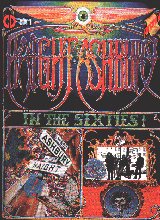 I bought the CD-ROM when it first came out, June, 1995. This was before any of the software stores had it and I think I had to order it directly from Rockumont. Ironically, they no longer have it, so now if you want one, you have to get it somewhere else (or at least that was the case when this draft of the review was written, July 2001).

When I first got the CD-ROM, I had a 486 (66mHz) computer with 8 megs of RAM and a beta version of Windows 95, which may explain why I had trouble with the CD at first. The installation program didn't work and I could only run it from the CD. Although the memory requirements, which were listed as 8 megs of RAM, I could not get the program to run without general protection faults until I upgraded to 16 megs. Once I upgraded the RAM and fixed a problem with the disk controller, the CD-ROM ran flawlessly.

With today's computers, most of my original problems I had with the CD are a thing of the past, except for one little point. Even today, I've found it best to close all other programs before running it, since it uses a great deal of your computer's resources and other programs running in the background may interfere with it. It seems to run best if run right after first starting the computer. The two CDs contain no autorun file, so you have to manually start them each time.

The program comes in a cigar type box that they call a stash box. On it are the 12 Alton Kelly collages. They claim that if you send in your registration card, you get a poster of these. These collages are also used in the program's game, but more on that later. The collages are of Grace Slick, Janis Joplin, Bill Graham, Neal Cassady, Mike Ferguson, Allen Cohen, Pigpen (I use this one for my Windows Wallpaper), Chet Helms, Ken Kesey, the Haight-Ashbury, and the Grateful Dead. The two CD-ROMS come in a jewel box that has the instructions and credits in it. When you start the program, a screen comes up that says, Be cool while loading and in about a minute, the intro screen comes up, the music starts and the pictures flip around.

If you click on the mandela and wait, a Hippie appears on the screen and tells you what to do. When you click on the Hippie, the main screen comes up, which gives you the three following choices:

Turn on: This is what they call the show and it tells and shows the story of the Haight-Ashbury from about 1965 through the Summer of Love as recorded in the underground newspaper, the San Francisco Oracle (which Allen Cohen edited) and as captured by many photographers of the time. It has an introduction by Raechel Donahue and is narrated by Allen Cohen, who did a fine job of voicing the script and reading the other artists works. As he does this, related photos and artwork are displayed on the screen. How accurite is the information? I only noticed one historical mistake (can't even recall what it was). It edfinately fills in gaps left by other historical accounts of the time period. One bit of information this program makes clear that all the Hippie history books (and I've read dozens) are very vague about is why the Hippies had to leave the Haight-Ashbury after the so-called Summer of Love (by the way, some of them have since come back!) Anyway, it's the best show and tell job I've seen on this subject and I would say it is very well done from both a historical standpoint and an artistic standpoint, although it seems to neglect some of the events (like the wake of Chocolate George) not covered in the Oracle.

I had two problems running the show. First and worst were the dread General Protection Fault errors, which means that you don't have enough memory. You probably won't counter that problem with today's computers. The second problem I had was the show sometimes hangs and goes into an endless loop between sections when the music stops. The only way I found to get it started again was to click on the credits icon and close the window that comes up. This problem persisted even after adding more memory and I think it is a problem with the show's "pause" feature. This problem disappeared following a hard disk crash. I think the problem was caused by a bad disk controller because replacing it seemed to fix the problem. Now the whole show will play without a single hangup. The running time of the show was about 2 hours on my old machine, but this sped up to an hour and a half after I upgraded to a Pentium.

Tune in: This is the reference section where you can read selected articles from the Oracle, listen to music set to thumbnail movies, look at some of the artwork, run the movies or roll your own show. The show, by the way, consists of about 150 sections, each about a minute or two in length. Roll your own show allows you to select which subjects you want included in the show. You can save this list to disk, but I found one little snag with this feature. Loading a show does not clear the playlist, as you would expect. Instead, it adds it to what's already in the playlist. So if you want to load one show and play it, have an intermission and load another show, you have to clear out the first show before loading the second, and there is no clear button to do this, so you have to manually clear each item in the playlist before loading the next show. The roll your own show feature makes the program more useful for educators, who might want custom shows for each class, or who might want to assign students to look at part of it in the media lab.

Drop Out: This is the program's game. Up to six people can play and you can be one of the nine people in the collages. It looks like it would be a good game for parties. You roll the dice and go round the board. Parts of the show play and messages come up telling what you did and how many points you gained or lost. There's even a cheat mode if you've got good reflexes, but I'm going to let you find out about that on your own so I won't spoil the fun. My only objection about the game is I think that some unfair Pigpen bashing (similar to the Jerry bashing that happened when he died) was done and I don't think that it is very kind to his family or fans. Every time Pigpen's picture comes up, you lose points.

The CD-ROM gives you a lot of bang for the buck (I paid about $35 for it, but I've seen it in stores for $30) and most Hippies will probably want it in their archives. When I got mine, the computer required to run it cost a king'a ransom and it was difficult to set up because multimedia was a new thing back then. Nowdays, every computer comes out of the box ready to run it and you no longer have to install CD-ROM drives and soundboards in order to run it. If you can find a copy, I don't think you will be sorry you got it. It is a very nice collection of photos and articles from the Haight-Ashbury era. You would have to buy more than a few books about the time period to get as much. The only other multimedia CD-ROM about the counterculture I know of (other than ones about the Beat Generation, which became out of print faster than I could get them) is the one about Woodstock (I've written a review about it), which I don't think gives you nearly as much as this one does, although it didn't cost as much either. Since Rocument is sold out of it (they say if you've got it, it's now a collector's item) you'd better find one now if you want one at an affordable price.

By the way, I've read another review (no longer on the internet) of the CD-ROM where the reviewer complained about seeing a picture and not being able to identify what it was. The solution to that is simple. All you have to do is move your mouse pointer to the upper left corner and click on the credits icon when it appears. Then a window will open that identifies every photo and all the music used for that segment of the "show." This is also another way to pause the show if the pause icon at the top of the screen doesn't work.