Last time, I wished everyone a groovy summer. Unfortunately, mine didn't turn out that way. Instead, it became damn near life threatening. I found out I had a brain tumor and because of the radiation treatment, I may never be able to grow any kind of hair again, other than my beard, that is. As far as how long I can survive this, I really have no idea. All I can say is it makes me live each moment in life as if it were my last. It does tend to make one much more spiritual. I think I'm going to leave the situation at that because I don't think it's going to do anyone any good rambling on about my negative experiences.

Over a year ago, I was forced to move my web site to another server when halcyon decided to ditch all its dialup accounts, so I had to move everything to the mindspring server. I had been at halcyon for six years, so the move was pretty substantial. During much of this move, all of my files stayed on the halcyon server, except I had replaced many of them with appendages to point to the same files on the new server. They have since erased all those files, so there is no longer any trace of the Wild Bohemian on halcyon. That means if you link to any of my files on that server, you need to update your links. I have noticed that some sites still link to those old URLs. Now I'm in the process of moving everything once again, hopefully for the last time, kind of a shame from the standpoint that now I'm getting very efficient at these moves, the last one taking less than a couple days to get the entire site functioning on the new server. On the other hand, I hate moving a site because of the links that get screwed up in the process. It's bad enough when people move their sites on me and mess up all my links. But as I say, I think this is going to be the final move.

Because of my illness, a very good friend has set me up with space on his server for my web site and even provided it with a domain name, which is http://wild-bohemian.com (pronounced wild dash bohemian dot com, so you can tell all your friends) . You should bookmark that, because I don't know how much longer I'm going to maintain the old site.

I'm adding a new section to the web site, mainly about the tools I use to do my art. The first one happens to be electronics, so this site now has an electronics section at:

That brings up an index to all my electronics articles. Eventually, I'll have a page that will list all the other tools I use, but electronics seems to be the main foundation I use to do my art. I became interested in it at a very young age and was encouraged because of the space race happening when I was a kid. A lot of people associate electronics with a nurdish mentality, especially computers, and would least expect to find a member of the counterculture skilled in it, but I've found no tool as effective as electronics to increase my ability to communicate, and this web site is only one aspect of that. In addition, I also use sound, lights and video.

First of all, I didn't start with computers, since they were not affordable when I was a kid, or at least nothing heavier than  flip-flops, which were not even ICs at the time. They were made with two transistors and several resistors between two small circuit boards, and then doped with blue epoxy. My uncle brought me a couple of samples, but I don't think they were functional. That was in the 60's and the digital ICs didn't appear in a big way until the early 70s, and although I played around with them when they first came out, including some flip-flops, I didn't program my first microprocessor until the late 70's, which was a 6502. I didn't have an assembler. I had to hand-code each instruction on a coding form. A year later, I got a TRS-80 and learned to program a Z-80, which was a bit more advanced. This time, I did have an assembler.

Long before I ever touched a computer, I was involved in using electronics in audio and lighting, especially sound systems for rock and roll shows and recording. The advances in recording since I started have been nothing short of incredible. We used to use 60 pound two-track studio recorders that recorded on 10" tape reels that cost $30 for 45 minutes worth of recording, and the machines sold for over $2000. Today, for $2000, you can get a 24 track hard disk recorder that outperforms anything that was in any recording studio anywhere in the 60s.

When I finally did get to computers, I was completely astounded by what you could do with them, even with a brain dead one like a Radio Shack TRS-80 model one, which was the first one I got. The main problem with it is it lacked many of important features you need, like lower case. We had to install an extra memory chip to add that. The keyboard also didn't have a control key, so we had to drill a hole in it and add that. It also lacked any kind of graphical user interface or pointing device.

So as far as computers go, I basically have a love-hate relationship with them. They are a necessary part of doing my art, but a real pain to keep running. I used to think I was the one who was stuck with just a lousy computer, then when I see that all my friends also have the sides removed from their computers so they can wiggle a drive cable when the damn thing won't boot, I see that I'm not alone.

Anyway, electronics is a good skill to have not only to communicate, but also in order to build all sorts of trippy things, as you will see on the new pages.

Another feature I'm adding to the web site are mailto links that fill out the subject field for you so I'll have a better understanding about what part of the web site you are writing about. This is extremely helpful when you are reporting bad links. Since this web site contains over 100 web pages, I have to have some way of knowing which one of those you are writing about, so finding a way to automate the mailto links was a real blessing. Here's how it works, if you ever want to set one up on a web site. The syntax is really simple:

Or in the case of this web page, that would be:

That opens up an e-mail composition window to my e-mail address, fills out the subject field as editor.htm, which happens to be the file name of this editor's column. Then, when you write your e-mail and send it, I will know that your comments have something to do with my editor's column.

Most literature claims that 1962 was the year of the light emitting diode, but I didn't actually see one until 1969, in the least likely place...a mental institution. One of the patients had one. It completely blew my mind when I saw it. It wasn't long after that that you could get one at Radio Shack, but they looked nothing like the ones of today, and the only color you could get was red. Green and yellow ones followed shortly after, but it took a really long time for them to produce a blue one. Then, a couple of years ago, I bought my first white one, which is actually an ultraviolet LED that makes a phosphor coating  glow white, much like a fluorescent light. 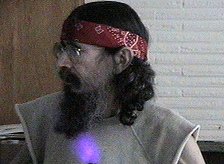 Finally, I ran into something I had to get, World's Smallest UV Keychain Light. I got one and liked the light it produced, but  what I really wanted was the UV LEDs contained inside, so I could use them as I wanted and not be forced to run them on expensive watch batteries. Finally, I found the actual LEDs for $2.95 each at Hosfelt Electronics. I have since found that you can get them even cheaper ($1.75) at All Electronics. They seem to be the same wavelength (395 nm) as used in the keychains. So for the cost of one of the keychains, you can get three of the UV LEDs, ready to go into anything you might dream up. In the picture, I am shining the UV keychain light on myself. This was taken the day of my first radiation treatment and the hair loss didn't occur until 14 days  later. 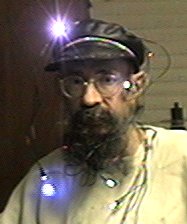 Once I get the actual UV light emitting diodes, I will have much more freedom as how I can use them compared to the keychain lights, which might be nice in the field, but the watch batteries for them don't come cheap, but all that changed now that I can get the actual LEDs. LEDs are easy to mount into miniature Christmas light sockets, which is how I build my chaser light strings. I have written an article on constructing them. Here's me fooling around with such a string. Although these are not the UV LEDs, (I just ordered them and don't expect them to come until the end of the week) the photo should give you some idea of how they might look. Anyway, I'm really excited about the art that can  possibly be created with these UV LEDs and hope that other people besides myself will start experimenting around with them.

One word of caution: some types of UV LEDs, especially the laser types, can damage your eyes, so make sure you observe all the safety precautions that come with the LEDs, and post warnings if you set them up in public. I don't think this is a problem for the 395 nm LEDs, but the ad for the keychain warned against looking directly at the light, although no such warning came with the actual product.

In case you haven't seen this site's page on ultraviolet light, you might want to look at that. That should give all the background you'll need on the state of ultraviolet light for the last 50 years.

There's also an ultraviolet exposure weather map you can use to determine how much sun screen you may need in various parts of the country. It seems to change from day to day. I used it to figure out why I wasn't having very good luck erasing my EPROMs in sunlight.