Physical Aspects of the Haight-Ashbury

For those of you who have never visited the Haight-Ashbury, here's a brief description of what the neighborhood is like. What we call the Haight-Ashbury is a five block area that extends on Haight Street from Shrader (where Chocolate George was killed) to Central. The block from Shrader to Stanyon (where Haight dead-ends into Golden Gate Park) is mostly commercial stuff like a McDonald's and other bummers. The area of the park that Haight dead-ends into is known as Hippie Hill because Hippies like to congregate there. It's really not a hill, but actually more like a slope into the park. It is a shaded area that has nice benches where you can sit and play your guitar.

Two blocks down from Haight and parallel to it is the Panhandle part of the park. This extends from Golden Gate Park to two blocks past the Haight-Ashbury district (to Baker St). Buena Vista Park is in this same two block area but located above Haight rather than below it. Although Haight St. itself is fairly flat, it is on the side of a hill. Here's the map.

What it was like the last time I was there

The first time I was in the Haight-Ashbury was in August, 1967. Ever since then, I have wanted to return there to try to figure out, what the hell was that all about? I wasn't able to get back there until 22 years later, May 1989. The most amazing thing I found was that there were still Hippies there running their Hippie shops. That is what I least expected to find! Here's some of the details from the notes that I took of what I saw.

May 1: First, I checked out Golden Gate Park to see if I could get my bearings from when I experienced the wake for Chocolate George. This was difficult because back then, I was looking at the scene going on rather than the park itself. I also checked out the polo field where the be-in (that I didn't attend, but saw pictures of) happened. Then I looked all over the park for Hippie Hill but had trouble finding it because it isn't really my idea of a hill. Then I ate lunch and was ready to check out the Haight-Ashbury itself.

I walked up Masonic to Haight and walked down Haight towards Golden Gate Park. Just walking down Haight St. again was one of my best experiences of my life. I could feel the energy of the area. When I got to the corner of Haight and Ashbury, I noticed that the original street sign was gone and a new one had been fastened to the trolley pole. Legend has it that they had a lot of trouble with people ripping off that street sign, because after all, wouldn't the coolest item you could have in your pad be the "original" Haight-Ashbury street sign? Only trouble was, it was never the original, because it was always the one they put up the last time someone ripped it off.

The scene on the street was much more mellow than the last time I was here. The thing that surprised me though, was that there still was a scene on the street. There were still some spare changers both young and old, and the ages seemed to range from college age to my age (40's). Thank god the runaway teenagers were gone. There were, however, a few punk-looking dudes thrown in for good measure, but they didn't seem to interact much with the Hippies. Some bums were hanging out by the Free Clinic (probably waiting for it to open).

I visited a 60's nostalgia shop that had T-shirts and even coffee cups that had the Haight-Ashbury street sign on them. I wish I had bought some of those for friends who copped out and became yuppies to remind them of the days when the sky was still the limit. A punk-looking collage age dude ran the place. While the T-shirts were groovy, the buttons were a real bring-down. They were mainly redneck jokes-clichés instead of serious Hippie slogans like No Turn Unstoned.

When I got to the end of where the hip shops were, I crossed the street and started going up the other side. A truckload of Hippies wearing Levi's and A-shirts went by and I felt hot in my sweatshirt with Kerouac's picture on it. It was just right for Golden Gate Park, but things were beginning to heat up. This side of the street had a Hippie hardware store that still sold those glowing neon peace symbol lamps. I don't know of any other place in the country where you can get one. but I still had the one I built a few years back.

I had to leave the Haight-Ashbury much sooner than I would have liked to because there were other things I had to get done. For one thing, I needed to go to the library. I walked up those steps where the Grateful Dead had sat to have a famous picture taken. After that, I went down to North Beach to check out the last Beat Generation shrine, which is City Lights Books, but no members of the Beat Generation were autographing books today. I got Kerouac's Big Sur because I was planning to go down there later in the week. 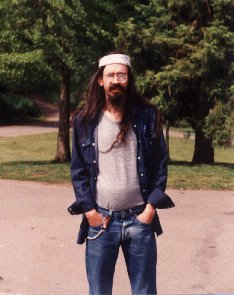 May 2: I got to the Haight-Ashbury earlier than the day before and most of the Hippie shops weren't open yet but Hippies were roaming the street. Today they looked pretty beat like poor old Jack. That was sad. One Hippie gave me a peace sign, but no one talked to me. More Hippies were in the park today, and I finally found Hippie Hill. I realized that I hadn't gone past it the day before. I might have not noticed it this time if it hadn't been for all the Hippies milling around there. In the picture, I'm standing at the entrance to the park, just off of Stanyon. A famous photo of George Harrason wearing hart-shaped sun glasses was taken in this area.

To save you the hassle finding Hippie Hill I had, here's the directions on how to get there, and I quote...

Hippie Hill has always and ever shall be the south facing slope overlooking Sharon Meadow. Walk into Golden Gate Park at the end of Haight Street, walk past all the homeless people and Alvord Lake, go under the civil engineering landmark (it's an underpass), head toward the first children's playground in the Uniter States and just before you get there, make a hard right, cut through the shrubs and Hippie Hill will be beckoning to you from across the lawn.

Then I went back to Haight St. and gave the whole area a good going over. There was only one difference in the buildings since 1967 that I could see, and that's that the Straight Theater had been torn down. It looked like they were about to build some new building there, but for now, it was just a hole in the ground.

May 9: Last visit to the Haight-Ashbury didn't go too well because it was all cold, rainy and miserable. Most of the Hippies looked like they had just gotten back from Woodstock because they were all wet and muddy. I couldn't figure out where they could have gotten that way - Golden Gate Park? Walking down the street was unpleasant because of the cold wind, but finally the rain let up. Girl selling buttons gives me the peace sign and digs my Kerouac shirt. She was one of the few that wasn't all wet and muddy. I looked through every shop to see if I could score a button with a groovy message on it, but couldn't find a single one that I liked. After about two hours, it started raining again, and I decided it was a good time to split the scene, so I cut out. Everyone there probably wondered why I didn't seem to have the nostalgia for the mud. It wasn't the mud so much as the cold I objected to. What a bummer.

I left kind of having mixed feelings about the whole scene. One thing that I was glad of was you could still visit the Haight-Ashbury and still see Hippies acting much as they did in the 60's, but without the gawking tourists, police hassles and runaway teenagers. The thing that was missing though was they weren't producing the art they did in the 60's. I don't know if this was caused by burnout or a lack of Owsley LSD. As I said, some of the Hippies looked pretty beat. There were no San Francisco Oracles or similar publications to be found and also as I said, the slogans on the buttons were not original. I don't know what kind of music they've got going on, but none was happening while I was there. Maybe they only stash their art in cyberspace these days. I'd been away a long time.

News flash! Since this was written, the Haight-Ashbury got a new underground newspaper. I haven't had a chance to get a copy of it yet, but they do have a web site, which I ran across when I was searching for all the Jerry Garcia stuff, a couple of days after his death. You can get to it (and read all the other current Haight-Ashbury news) from the Other Haight-Ashbury Sites page.